“Techi,” he says, looking up from his wheelchair, “how do you call that couple? There, right beneath the clock, that’s where they sat.”

“Nadine, yes. Very nice,” he mumbles, resuming his chopping of red and yellow chilies into the bowl. “But not like Celia Cruz.”

The Cuban salsa singer’s portrait smiles down from the wall. Solari, his white hair peeking out from a rakish fedora, looks up at her, shakes his head wistfully.

It’s a slip, granted, though eminently understandable, given Solari’s long trajectory. At 95, the Lima cuisinier has served so many presidents, singers, European nobles, Hollywood stars, master chefs, and other luminaries that even a visit from Peru’s premier power couple can seem like just another reservation.

Apart from that, the years, while indeed passing, appear to have taken surprisingly little toll on the avuncular Solari. After seven decades in business, he’s still chatty, animated—and totally in command in the kitchen.

His guests have been legion. They include nearly every Peruvian president since the 1960s, Aristotle Onassis, John Wayne, the Mexican movie comic Cantinflas, Magaly Solier—star of Peruvian cinema’s 2009 breakout hit The Milk of Sorrow—plus a long line of European nobles, several of whom have bestowed upon him jewels and other valuables.

All this, of course, in addition to his beloved Celia Cruz, whose thank-you letter hangs from the wall.

Why all the VIPs flocking? The answer is simple. Food and history: Solari’s tiny cevichería (ceviche restaurant) oozes both. Operated out of the restaurateur’s house in Lima’s quietly residential Jesús María district, it’s a modest dining room with four tables and exactly one menu option: ceviche made with sole, for 50 soles. There’s no website, no credit cards. And yet, this obscure huarique (hole in the wall) is a Lima institution, praised to the skies by seemingly every one of Peru’s superstar chefs, from Gastón Acurio to Javier Wong to Humberto Sato.

The reasons? One, Solari is the inventor of Peruvian ceviche in its modern form. And two, despite his multitudinous imitator-competitors, the word among aficionados is, he still does it better than anyone.

Truth, or Lima legend? It’s to find out that I’ve come for lunch, this gray winter afternoon.

“Ceviche began in Inca times, you know,” Solari says, easing fleshy chunks of sole into my meal-in-progress. “Only the natives didn’t have lime, which arrived later, with the Spanish. So they marinated the fish in chicha [fermented corn beer].

“Later on, Peruvian food developed due to the institution of slavery. On Peru’s north coast, the slaveowners would give their slaves the offal from their cows, and the slaves would use lime, chilies, and other marinades to make the scraps edible.

“Our food, you see, has very humble origins.”

Humble origins, but Solari was among the first to see those origins’ potential. From an early age, he started experimenting with different ingredients and techniques, to turn the everyday into the extraordinary.

Take fish, for instance. In the ultra-class-conscious Lima of Solari’s childhood, sea bass was considered the variety of choice for the upper classes; the lower orders contented themselves with bonito or sole. One day, however, upon seeing a local fisherman throw away some of the latter, Solari decided to try it in his recipes—but only after removing all the organs and blood, which could spoil the purity of the fish’s flavor.

The result? A delicate, fresh updating of a coastal tradition—and many happy guests.

But Solari didn’t stop there. Other innovations of his were also grounded in everydayness, raised to the level of magic.

The most important grew out of improvisation. Before him, making ceviche was a hopelessly baroque affair. Cooks used to marinade fish in lime or bitter orange for hours or days, and add a host of abstruse ingredients, including milk, in complicated proportions. Then came Solari’s moment of genius. He was 12, he insists, and his mom found herself preparing an elaborate lunch for 60 people—and completely overwhelmed. He offered to make the ceviche for her. But because the guests were already arriving, he had to break protocol, whipping up a flash concoction of fish, lime, and chilies, all in less than five minutes.

The result? The guests loved it. And his mother loved him. 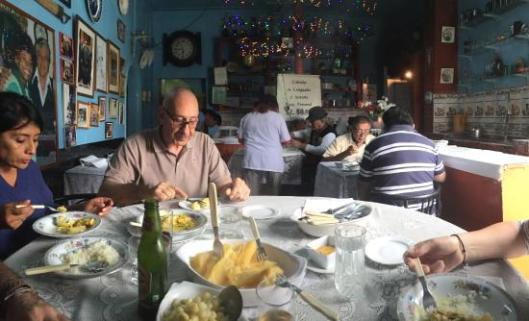 Solari is emphatic as he recounts his tale. “Ceviche has to be prepared in the moment, just before eating. And it must be simple. You have to limit yourself to five ingredients: fish, sea salt, lime, chilies, and onions. Plus, the chef’s touch is crucial: not anyone can combine these flavors in the right proportion.”

Radical simplicity of this magnitude has drawn accolades from Peru’s greatest culinary artists. Javier Wong, head of the innovative Chez Wong just across town, is among the votaries. “He was the first one to serve ceviche made fresh, instantly. When I ate it, I was blown away.” Meanwhile, gastro-superstar Gastón Acurio describes his first Solari encounter in near-religious terms. “How to define that person who, in five minutes, gave me a culinary lesson that I had been seeking fruitlessly for years?”

Back at my table, the moment of truth has arrived. Teresa, smiling broadly, serves me my lunch, with a side plate of yuca and pepper sauce.

“Use the spoon,” she says. “He doesn’t like for the broth to be wasted.”

I add some choclo—Andean corn—to the soupy elixir. The cubes of fish are nearly translucent, from the lime. I hold up a forkful—and bite.

It’s divine. Tangy and hot and cold and delicately fragrant.

The Lima buzz is more than justified.

“I’m an autodidact,” Solari insists. “Everything I’ve learned, I’ve learned at the table. Eating, studying, practicing. I’ve never written down my recipes. It’s all in here,” he points to his head, “and when I go, it’ll go with me.”

I continue eating, savoring the complex flavors in each spoonful, pausing only long enough to ask the maestro if his family ever helps in the restaurant.

“Bueno, Techi is like my family,” he says, pointing to his bustling assistant. “She’s from Chiclayo [on Peru’s northern coast], like my mother.” He quasi-adopted her 40 years ago, and she’s attended him ever since, handling business aspects of the restaurant and aiding with mobility issues after a fall a few years back left him partly wheelchair-bound. A nephew also helps with various chores. He has no children.

And does he serve other dishes, besides ceviche?

“Oh yes. I’ve had presidents come by just for a plate of arroz con camarones or arroz con conchas [rice dishes with shrimp or mussels]. But they have to be ordered in advance.”

My stomach is quickly growing sated; Solari’s portions are generous. I sit back, gazing at the momento-laden walls. I feel fortunate to have experienced a living piece of Peruvian history.

I ask Solari if he’s ever had other restaurants. He shakes his head.

“I like to help people, to wait on them,” he says. “Food for me is about the guests.

“Seventy years, I’ve done this. Why would I want to have four or five restaurants, if I can’t show my love to the customers?”