From upstairs comes the thudding beat: muted synths, bone-shivering bass. It rattles the windows, dark now, of the Aldo jewelry store below, before reaching the bench I’m monopolizing across the way in the plaza.

Obeying the musical summons, three backpackers, sporting chuyos and Gore-Tex parkas, saunter up to the door speaking Hebrew. A parley of ¿qué tal?s with the bouncer. Fist bumps. Then it’s upstairs to join the Wednesday-night revel at one of Cuzco’s go-to hook-up spots for globalized youth.

From my bench, I ask myself: what are the odds these guys realize they’re partying in the same digs as Inca royalty?

It’s the walls, are what gives it away. My three travelers may be a bit sloshed to notice, but the entrance they’ve passed on their way up to Mama Africa’s dance club exhibits first-quality Inca stonework: coursed ashlars fitted millimetrically together to form a festival hall fit for a king. And not just any king, but one on a par with Alexander the Great. Later, the same stones would shelter a very different conqueror, his Spanish nemesis, who effectively brought down a civilization.

Cuzco, Peru is full of such paradoxes. On the one hand, in no other city is Inca architecture so gloriously on display. Walk five minutes along any downtown street, and you’ll pass half a dozen mortarless walls whose jigsaw-like precision gives even Machu Picchu a run for its money—and this though their makers lacked the wheel as well as iron tools. Yet this doesn’t keep this stonework from being ridiculously under-visited. Chalk it up to incuriosity, but few of the polar-fleece-and-sandals crowd that throng the city’s plazas seem conscious that its walls conceal some fascinating secrets—and that they’re prepared to whisper those secrets to those who ask.

Here in the plaza, I’m ready to listen. Tomorrow early, my plan is to hit up some of the city’s main Inca structures, in a walking tour of Cuzco as the Incas experienced it.

A reconstruction, spot by spot, of the imperial capital that was.

More carousers are arriving. A line is forming outside the door. I listen a moment to the pumping reggaetón, then head back to my hostel.

Eight a.m. Glorious mountain sunshine. The first stop, after grabbing my morning coffee, is a place with no walls, Inca or otherwise. But that doesn’t make it any less of a must-see.

Haucaypata was the Quechua name for Cuzco’s main square. Originally it spread out a good bit further than the modern, tourist-filled plaza de armas in front of me. It was also even more festive, if that’s possible.

“The parties were for the dead as well as the living,” says Hernán Jaramillo, the bearded, bespectacled tour guide and former university prof who’s come to fill me in on cuzqueño history. “Here, on sacred holidays, the Incas would trot out the mummies of dead rulers that inhabited the surrounding palaces. They’d make them eat, drink, give counsel, even visit one another. For the Incas, the dead were as alive as we are.”

Evidently this pre-Hispanic Weekend at Bernie’s was quite the shindig: Hernán indicates the square also had gutters for carrying away the chicha (fermented corn beer) and other effluents poured out during the carousing. Seen in this light, the disco crowd of the night before are merely continuing a time-honored tradition.

“The square was incredibly symbolic. When a new region was annexed to the Inca empire, the custom was to bring a sample of the soil here and mix it, to show its inclusion. Really, it was the center of everything.”

We pause, looking up at the statue of the Inca Pachacutec above the fountain. Two kids are playing tag around it. Hernán claps his hands, rubs them together.

“Ready to meet the guy who’s responsible for all this?”

From there, it’s a short walk to the square’s northwest corner.

“This was Pachacutec’s house—or maybe his festival hall. Scholars aren’t sure. But one thing is certain: it was once the most splendid building in Cuzco.”

Hernán is gesturing towards the Casana, the building that houses the disco I was casing the night before. The smooth rectangular blocks of the façade present subtly graded squares of color: a Mondrian in 50 shades of gray.

“Coursed ashlars, these are called, and they were the style of masonry the Incas used for royal or sacred buildings. The common buildings had polygonal masonry, where the Incas utilized the stones more or less in the shape they found them. But these perfect rectangles? They always indicate, ‘Ojo, this was someone important.’”

Hernán goes on to declaim about Pachacutec. The ninth Sapa Inca, it seems, was the greatest of them all. Thanks to his Alexander-like genius, a small settlement in the Cuzco valley morphed into the South American superpower it later became: 800,000 square miles, stretching from Colombia to Chile. All the great Inca monuments—Machu Picchu, Sacsayhuaman, the Capac Ñan road system—were public-works projects under his reign.

“Pachacutec was a legendary emperor, and the Casana was his hall for equally legendary fiestas. There was space for 3,000 guests, with a small pond inside. They’d have ritual combats beside it. Later, when the conquistador Pizarro arrived, he was craving luxury after his trip across the mountains. So he set up camp here.”

“Two lions in the same den,” I suggest.

“Come on—you ready for some exercise? I hope so, because we’re going uphill.” 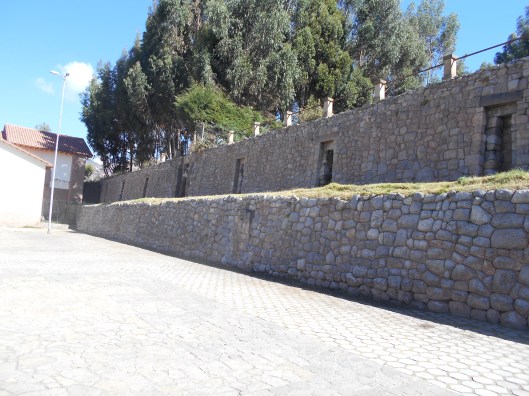 The climb uphill quickly turns into a forced march: 200 meters straight up, via steep cobblestoned alleys. By the time we get to the plaza above, both of us are panting. But the view out over the city is killer.

Then Hernán turns me around to see something equally sensational: a sweeping double terrace of Inca walls, with 11 trapezoidal niches.

“Hermoso, ¿no? The Incas were great artists, and this, the trapezoidal doorway, was their signature. It was an aesthetic innovation, reflecting their love of geometry. You see those double jambs? They’re like the coursed stones, indicating this is a royal place.”

Who was the royalty? I ask.

“Well, that’s the thing,” my guide scratches his neck. “We’re not sure. But tradition has it Colcampata was once the palace of Manco Capac, the founder of the Inca civilization.”

Manco Capac? The mythic king who supposedly came out of the waters at Lake Titicaca? Who arrived in the valley of Cuzco, and thrust a golden rod into the ground to found the city?

“Así es, my friend. We know he almost certainly existed, though it’s difficult to separate legend from fact. I’ll show you something else.”

Hernán takes me further up the curving road and down a gravel lane. There we find a lone wall, sporting a trapezoidal window and another magnificent double-jambed portal.

“This was the house of Paullu Inca and his son Carlos, who were puppet rulers after the Spanish conquest. They were some of the last in the royal Inca line. From here, they tried to preserve as much power as they could while the Spanish were warring with each other.

“Imagine: the beginning and the end of the Inca empire, together in one place.”

I stand, contemplating. Presently my guide motions me downhill. 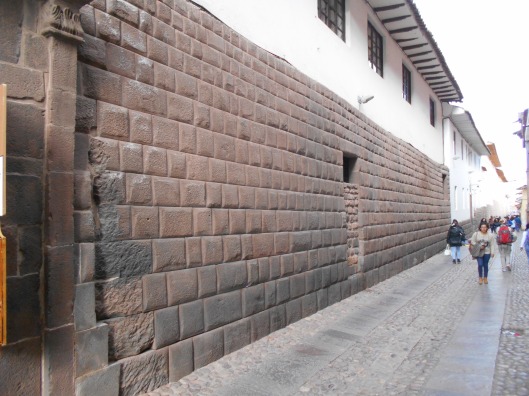 “Clothes, women, and beer. That’s what the Inca emperor liked, and he got them right here.”

We’re back down in the plaza, under a Starbucks on the south portal. The sun is illuminating a magnificent passageway of brown and gray pillowed masonry, topped by snow-white adobe. Hernán is schooling me on the pleasures characteristic of the Acllahuasi, home to the sacred virgins of the sun.

“It was an elite girls’s school, inhabited by maidens sent from all the towns of the empire. If you were a girl here, you learned religious rituals in the service of the sun-god Inti. You also weaved textiles and fermented chicha for the Inca’s table. And if you were really lucky, you became a member of his harem.”

A nunnery that was simultaneously a harem? My eyebrows go up.

“Bueno, you have to understand, this was a special place. Besides the Inca, no man was allowed inside. The penalty for disobedience was death. Later, in 1536, when the Incas laid siege to Cuzco to drive out the Spanish, they avoided damaging this compound, out of respect for its holiness. Here, I’ll show you something else.”

We walk thirty feet down the alley. Hernán points to another stone wall on the other side of the street, behind the Jesuit church.

“This was the location of the Amarucancha, the courtyard of the serpents. It was supposedly the palace of Huayna Capac, the last Inca ruler before the civil war that tore the empire apart.

“Why serpents? Well, legend has it that the emperor kept a huge pet snake with him in this enclosure. Brought with him, supposedly, after he conquered the jungle to the east. To keep it fed, he’d sacrifice two llamas every day. The serpent was considered a holy animal for its power.”

He checks his watch. “Let’s keep going. We’ve got one more place to visit.”

The mummy is looking up at me, jaw agape, from beneath the glass. Around us, the sunken quad is a maze of ruined walls.

“You have a new friend,” Hernán laughs.

I squint against the sunlight. The skeleton is shrunken, folded in fetal position into a shallow pit. Then I notice: the walkways of the quad are dotted with similar inmates.

“Remember I told you, for the Incas, the dead were like living beings? Well, many of them lived here, at the Cusicancha. They may have once been priests of the sun-god; this was probably a precinct reserved for the city’s priestly caste.”

Hernán motions me on, along the compound’s gravel paths. On route, we see the foundations of four massive canchas or enclosures, plus the wells and water channels that supplied them. The gray-and-russet stonework glows.

“This area is still being restored by archaeologists. But most likely it was a place where the Inca priests did preparatory activities for the rituals in the Qorikancha, the great sun temple next door. Its walls are made from the same stone. You know the Qorikancha?”

I do, but Hernán’s explanations have got me fired up to revisit. Looking at the walls around me, I wonder what other Cuzco secrets I’ve missed.

Would my guide consider extending our tour?

“Claro, hombre. It’d be a pleasure. Only,” he checks his watch, “it’s one o’clock, and I have a pressing matter to attend to.” He pats his potbelly.

1 thought on “In Cuzco’s Historic Streets, a Search for Inca Walls”